It was when we arrived at our gig at Cellar Door, with the wonderful Topsie Redfern, that we saw our friend Duncan and he mentioned that he was organising entertainment for a fundraiser with the Albert Kennedy Trust. After asking whether we’d be available to perform, he revealed that the event was to take place at…..The Ivy!

This restaurant and club is an iconic venue of London, a West End institution popular amongst celebrities. It’s exactly the kind of venue I imagine Agatha Christie would have visited, or at least her characters would, with its Art Deco inspired decor. Of course, we accepted the gig. WOW! All three of us were reeling at being given the chance to perform there.

The next few we 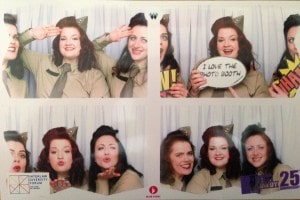 eks were spent rehearsing and making sure we had all the details for our performance. When the day arrived, we spent the morning getting our hair ready in the obligatory curlers and head scarves and made our way to The Ivy. We didn’t half get some funny looks on the bus! On arrival, we ascended the beautiful stairway up to the Club entrance, through a rose-strewn archway, and into the sophisticated wood-panelling beyond. We were made to feel so welcome as soon as we set foot in the building. There were various members of staff from the Ivy rushing about to make sure all was ready for the evening, lots of crew members setting up different stages and sound equipment and even a photo booth (which we had fun in later)! We had our quick soundcheck then were whisked off to the changing rooms for us to get into our costumes and finish our hair! Now, I have to mention here that Marcia is our hair guru! She has a knack for period style hair so she is always called upon to do ours, and quite frankly, you just have to see our photos to see how awesome her work is!

While we were getting ready, we met the other performers of the night who ranged from spangly leotard wearing contortionists and fire breathers to bejewelled burlesque dancers and ope

ra singers. It was a very entertaining night.

Once all the guests had arrived it was time to perform our first set of the evening. We made our way to the Piano bar where there were a few guests (most were up in The Loft getting ready to eat) but we went on nonetheless and unfortunately a bit of a disaster struck – one mic stopped working!!! Fear not, Karen and I shared a mic for the next song and all was fine. We cut that set short as sharing a mic was not ideal, but as we were walking offstage, we still received many compliments! Time to rest perhaps ….NO WAIT…..we’re on again but upstairs in The Loft! We made our way up the stairs to the top floor and went onstage to sing our songs. We had three songs to sing – In The Mood, Don’t sit Under the Apple Tree and Boogie Woogie Bugle Boy – and this time it went without a hitch, and the room was buzzing! We retired to the changing room to celebrate with a cheeky vino, before we were called on later to do another two songs before the charity auction. We knew the room would be filled so the adrenalin was racing! We took to the stage to perform Sing, Sing, Sing and Boogie Woogie Bugle Boy once more (it is a classic trio song after all, and fast becoming a firm Sisters favourite). Both were upbeat and jolly songs and we were thoroughly enjoying ourselves as was the audience! We left the stage to shouts of “MORE!” which was a fantastic feeling, and could then enjoy the rest of the night, watch the hilarious Alan Carr host the auction and have some very silly fun in the photo 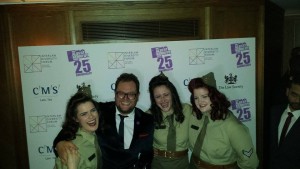 It truly was a brilliant night, certainly one we’ll never forget, and all whilst supporting a wonderful charity – what more could three Sisters wish for?